Owner's Manual for PIONEER PRO-720HD/KUXC/CA, downloadable as a PDF file. 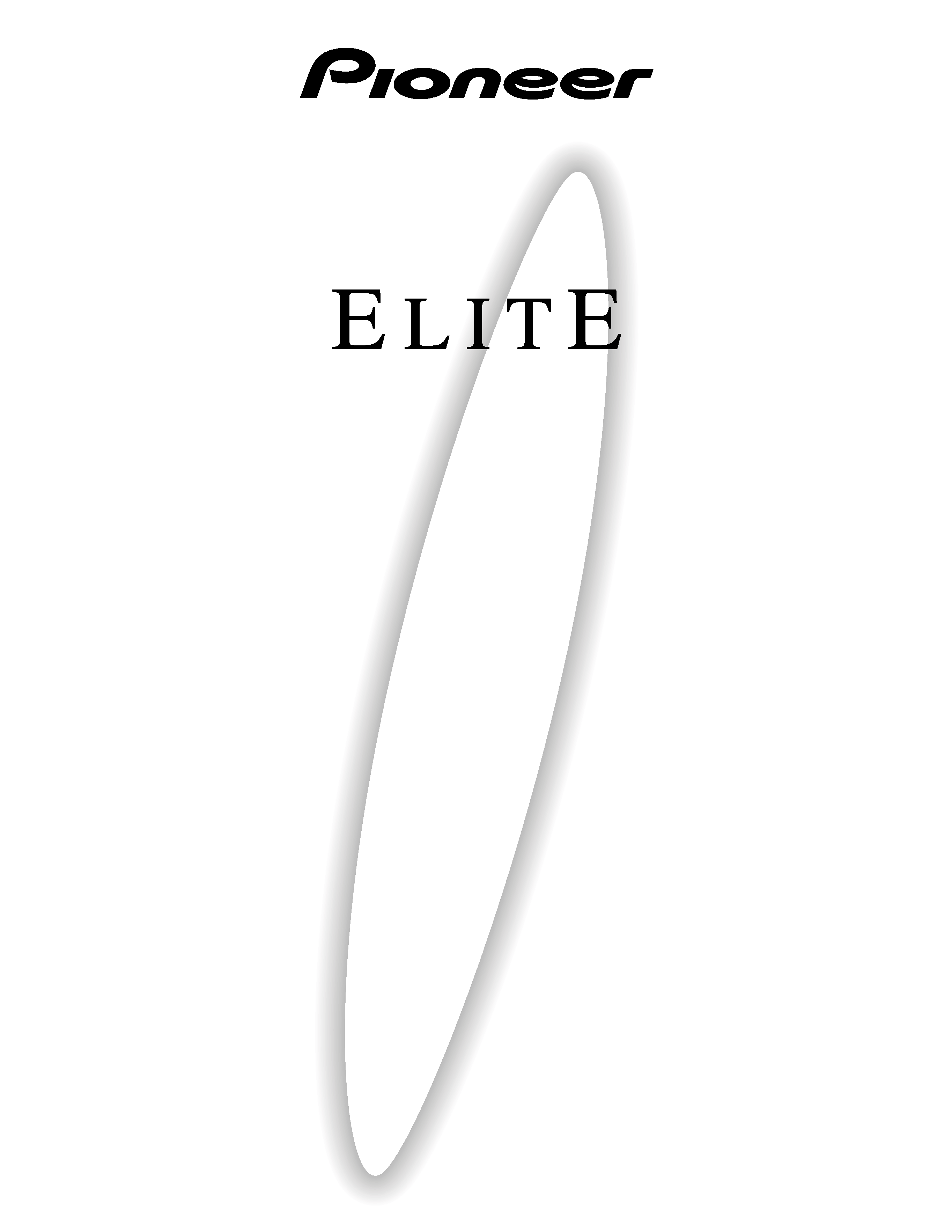 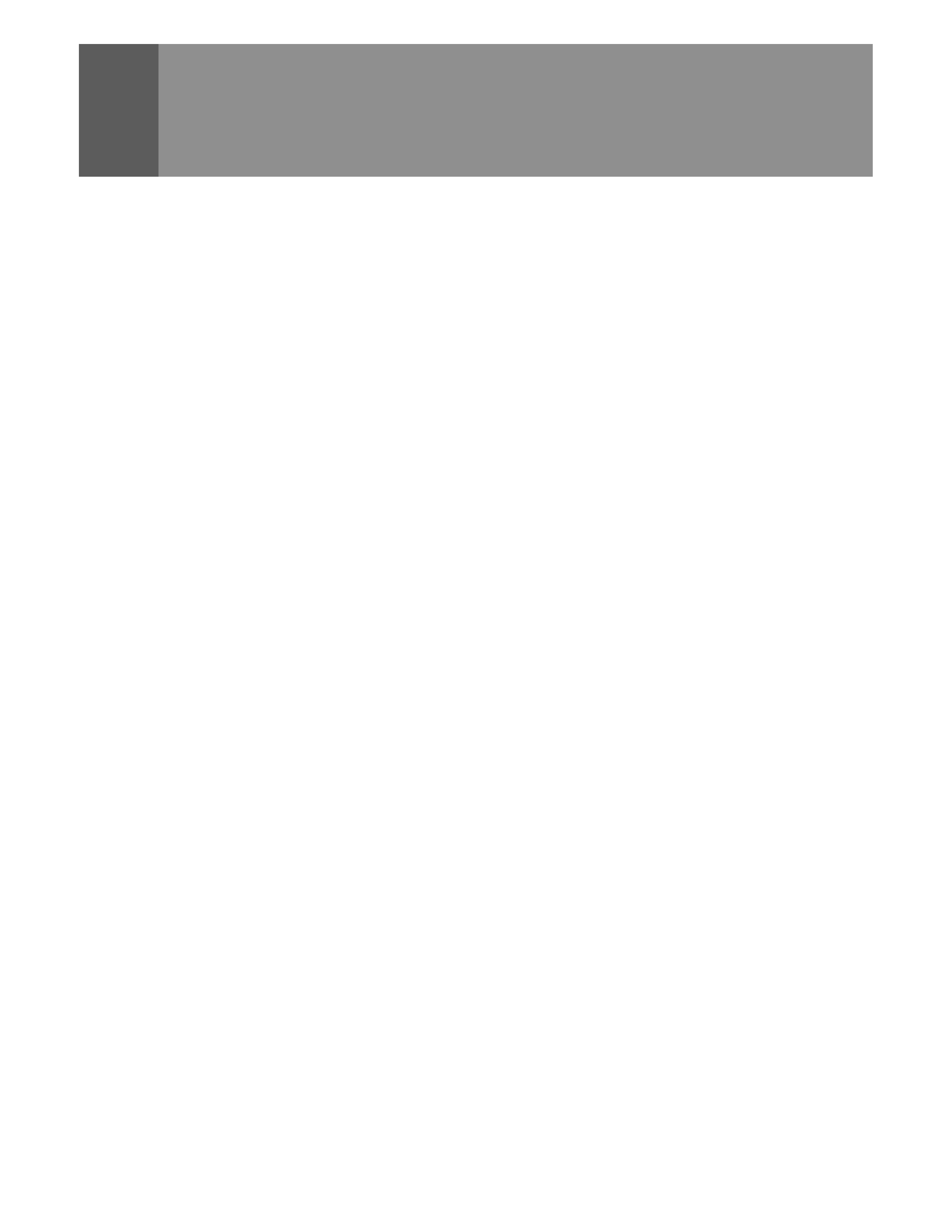 2
Progressive Scan/HDTV READY
All SDTV and HDTV signals are converted to 1080i signals and
displayed at high resolution.
Dual System Component Input for NTSC/
Progressive
Connection to a DVD player with a component output terminal
makes possible high picture-quality display, superior to that
of S-VIDEO terminal connection. Also handles high resolution
component input (1080i, 480p), which will function as an
interface for high-quality images in future.
DUAL TUNER (SPLIT screen and SEARCH
screen function)
Two TV tuners are provided, making it possible to split the
screen vertically in two and display moving images
simultaneously on them. In addition, the channel search
function makes it possible to check, etc., on the program in the
back. This adds remarkable convenience when you are
concerned with two programs.
Fully Illuminated Remote Control Unit
A fully illuminated universal remote control is used that makes
it possible to operate other devices. Remote operations can
thus be performed easily even in dark rooms and similar
environments.
Highly Detailed Image Display Technology
The 0.52mm ultrafine-pitch screen, Hi Band Video Amplifier
circuit, Progressive contour correction circuit and various other
technologies for creating high picture quality make the display
of highly detailed images possible.
Lens System for HDTV
Adoption of a lens system for high-resolution HDTV that
faithfully reproduces HDTV 1080i signals allows highly color-
saturated images to be displayed at high resolution.
Whole Screen IR Receiver
The remote control sensor is installed behind the screen,
allowing you to operate this monitor with the remote control
unit in those installations where only the screen is revealed.
3D Y/C Separation Circuit
This three-dimensional Y/C separation circuit reproduces
clearer picture quality.
Scan Velocity Modulation Circuit
Precise images from progressive scanning can be displayed
in even greater detail, owing to the Scan Velocity Modulation
(SVM) circuit. In accordance with image type and preference,
the level of effect can be changed in terms of three stages.
Tinted Protective Screen
The accompanying protective screen is tinted, not only to
protect the screen but to present more natural high-contrast
images by renewing the color.
Pioneer's PureCinema Format Converter
An advanced and exclusive I/P (Interlace/Progressive) format
converter developed by Pioneer, called "PureCinema", delivers
a high-resolution progressive picture. It reproduces film
material in a very smooth and film-like image. This is perfect
technology for movie lovers.
Reference Theater Mode
This mode reproduces film material just like a real film image.
By cutting video enhancement circuits, the picture becomes
more natural and looks filmlike.
Room Light Sensor (RLS)
When you select RLS on (LEVEL 1, LEVEL 2), in accordance
with the ambient light of your room, TV automatically adjusts
the picture brightness to reduce eye strain.
Multi-Point Convergence System
Thanks to new convergence system digital technology, not
only can the center of the screen be adjusted, so can an amazing
72 other points (full mode) across the viewing area. This makes
it possible to display clear images with no color distortion
around the entire screen.
The adjustment is easily done using the remote control.
Program Block (V. CHIP)
You can block selected programs based on the established
rating system for television and movies.
<U.S.A. RATING SYSTEM>
The TV Parental Guidelines are used to rate television
programming: <TV-Y>, <TV-Y7>, <TV-G>, <TV-PG>, <TV-14>
and <TV-MA>.
The Motion Picture Association of America (MPAA) guidelines
are used to rate movies: <G>, <PG>, <PG-13>, <R>, <NC-17>,
<X> and <NR>.
<CANADIAN RATING SYSTEM>
The Canadian English Language Rating system is used to rote
television programming: <C>, <C8+>, <G>, <PG>, <14+> and
<18+>.
The Canadian French Language Rating system is used to rate
television programming: <G>, <8+>, <13+>, <16+> and <18+>.
In order to block programming you feel is inappropriate, rating
limits can be set on both systems using the remote control
and a password.
Read and understand these 'Operating
Instructions' before operating your Monitor.
Follow
the
'IMPORTANT
SAFETY
INSTRUCTIONS AND WARNINGS' section and
all the warnings on the product.
FEATURES 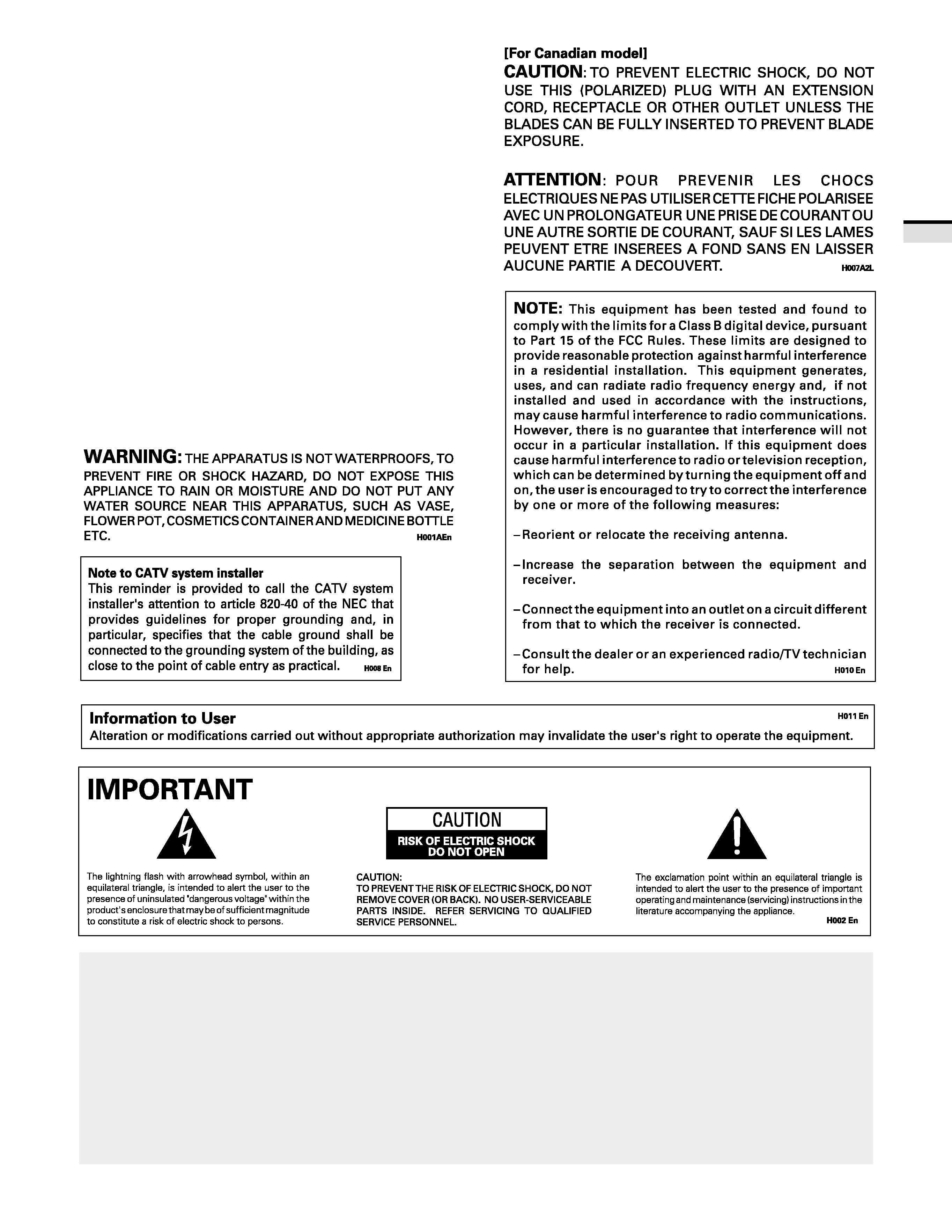 3
INTRODUCTION
Thank you for purchasing this PIONEER HDTV Projection
Monitor.
Please read the precautionary instructions enclosed with these
operating instructions please do so before proceeding.
After learning how to operate the Projection Monitor, be sure
to keep this manual handy for future reference.
[For U.S. model]
IMPORTANT NOTICE
H006AEn
The serial number for this equipment is located in the Rear
panel. Please write this serial number on your enclosed
warranty card and keep it in a secure area. This is for your
security.
In this manual, we refer to the 'HDTV PROJECTION MONITOR',
as the 'Projection Monitor' or the 'Monitor'.
Note on the SPLIT screen and SEARCH screen functions
The SPLIT screen and SEARCH screen functions provided in
this monitor are intended for private viewing only.
Use of the above video processing functions for profitmaking
purpose or for public viewing (clubs, hotels, etc.) without prior
authorization from the transmitter and/or owner of the video
program (s) may be an infringement of existing copyright laws.
NOTICE ON ADVERSE EFFECTS ON THE TV TUBE
When playing TV games, operating computers or displaying still pictures with your Monitor, be
sure to keep in mind the following points;
1. Select the 'GAME' mode. (Refer to page 51 of the Operating Instructions)
2. Do not use your Monitor for more than two hours.
3. Watch normal TV broadcast's for three times longer than the time of playing TV games, operating
computers or displaying still pictures.
Still patterns can scar the Monitor causing performance damage to the CRT. 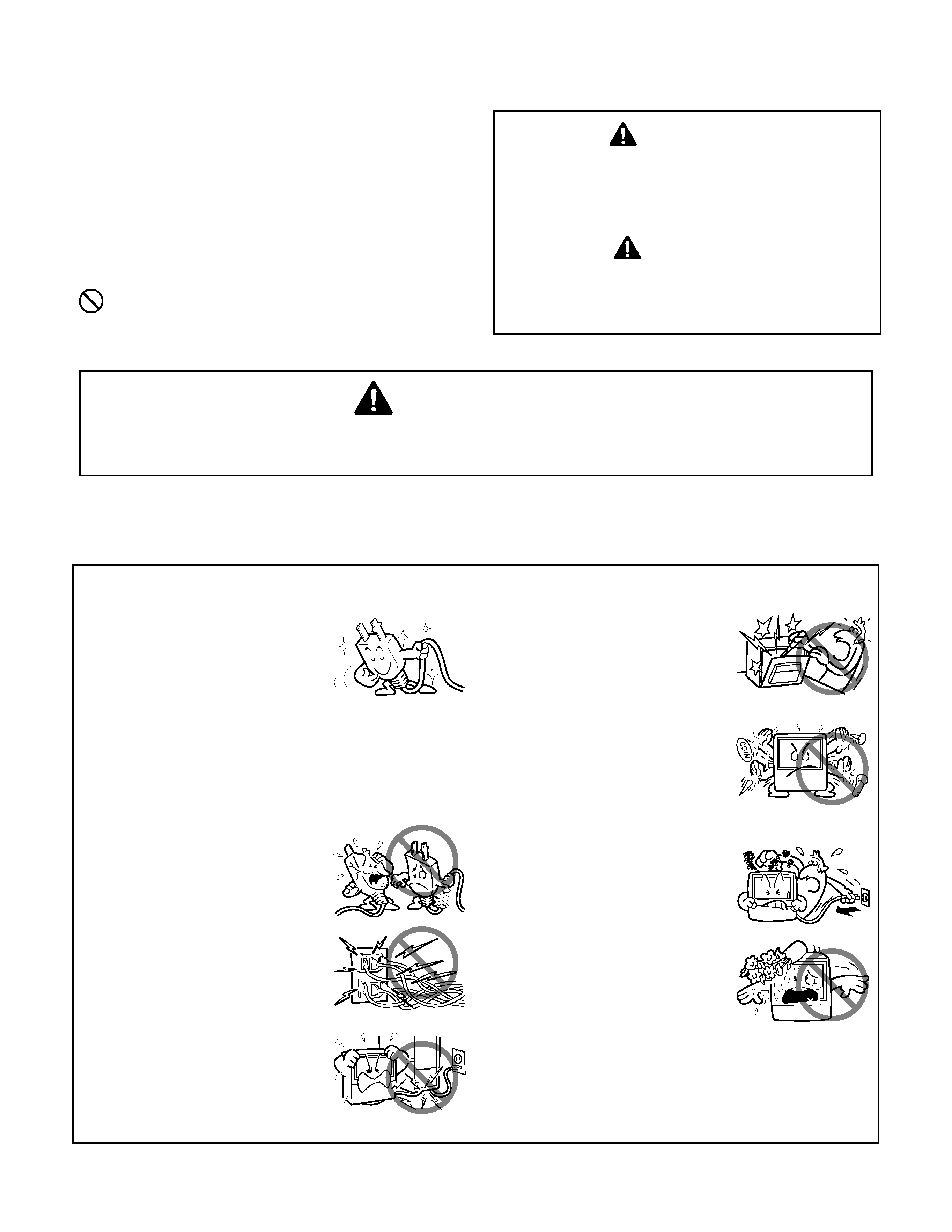 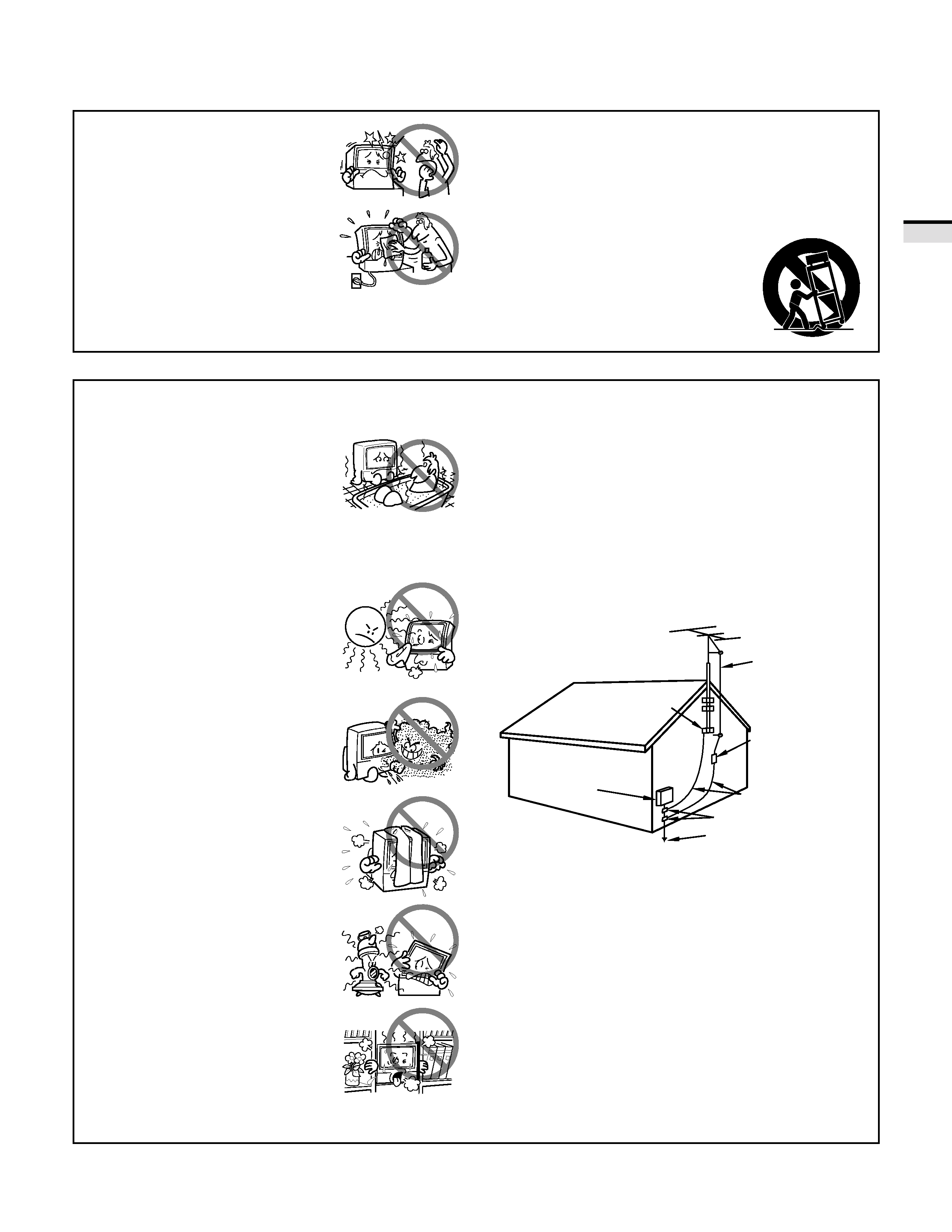 5
INTRODUCTION
9.
Do not subject your Monitor to
impact of any kind. Be particularly
careful not to damage the screen
surface.
10.
Unplug the Monitor from the wall
outlet before cleaning. Do not use
liquid cleaners or spray-type
cleaners. Use a damp cloth for
cleaning.
11-1. Do not place this Monitor on an
unstable, uneven or an inclined
location. The Monitor may
overturn, causing serious injury
(to a person), and serious damage
to the appliance.
11-2. Be careful when placing the
Monitor on a cart to move it.
Quick stops, excessive force, and
uneven surfaces may cause the
Monitor and cart to overturn.
12.
· Do not use the Monitor near
water, for example, near a
bathtub, washbowl, kitchen sink,
or laundry tub, in a wet basement,
or near a swimming pool, etc.
· Never expose the Monitor to rain
water.
If the Monitor system has been
exposed to rain or water, unplug
the Monitor from the wall outlet
and refer servicing to qualified
service personnel.
13.
Choose a place where light (artificial
or sunlight) does not shine directly
on the screen.
14.
Avoid dusty places since the
buildup of dust inside the Monitor's
chassis
may
result
in
the
malfunctioning,
when
high
humidity persists.
15.
· The Monitor has slots, or
openings in the cabinet for
ventilation purposes to ensure the
reliable operation of the Monitor,
and to protect it from overheating.
These openings must not be
blocked or covered.
· Nevercovertheslotsoropenings
with cloth or other material.
· Never block the bottom
ventilation slots of the Monitor by
placing it on a bed, sofa, rug, etc.
· Never place the Monitor near or
over a radiator or heat register.
· NeverplacetheMonitorinabuilt-
in enclosure such as a bookcase,
unless proper ventilation is
provided.
PROTECTION AND LOCATION OF YOUR HDTV PROJECTION MONITOR
16.
If an outside antenna is connected through other
equipment, be sure the antenna system is grounded so
as to provide protection against voltage surges and built-
up static charges. In the U. S. A., section 810 of the
National Electrical Code, ANSI/NFPA 70, provides
information on proper grounding of the mast and
supporting structure, grounding of the lead-in wire to
an antenna-discharge unit, size of grounding
conductors, location of antenna-discharge unit,
connection to grounding electrode, and requirements
for the grounding electrode.
EXAMPLE OF ANTENNA GROUNDING IN
NATIONAL ELECTRICAL CODE INSTRUCTIONS
ANTENNA
LEAD IN WIRE
ANTENNA
DISCHARGE UNIT
(NEC SECTION 810-20)
GROUNDING CONDUCTORS
(NEC SECTION 810-21)
GROUNDING CLAMPS
POWER SERVICE GROUNDING
ELECTRODE SYSTEM
(NEC ART 250, PART H)
GROUND
CLAMP
ELECTRIC
SERVICE
EQUIPMENT
FIG. A
NEC-NATIONAL
ELECTRICAL CODE

This manual has 3 pages, file size: 0.03 MB. It's available in languages: English.