Owner's Manual for NAD 613, downloadable as a PDF file. 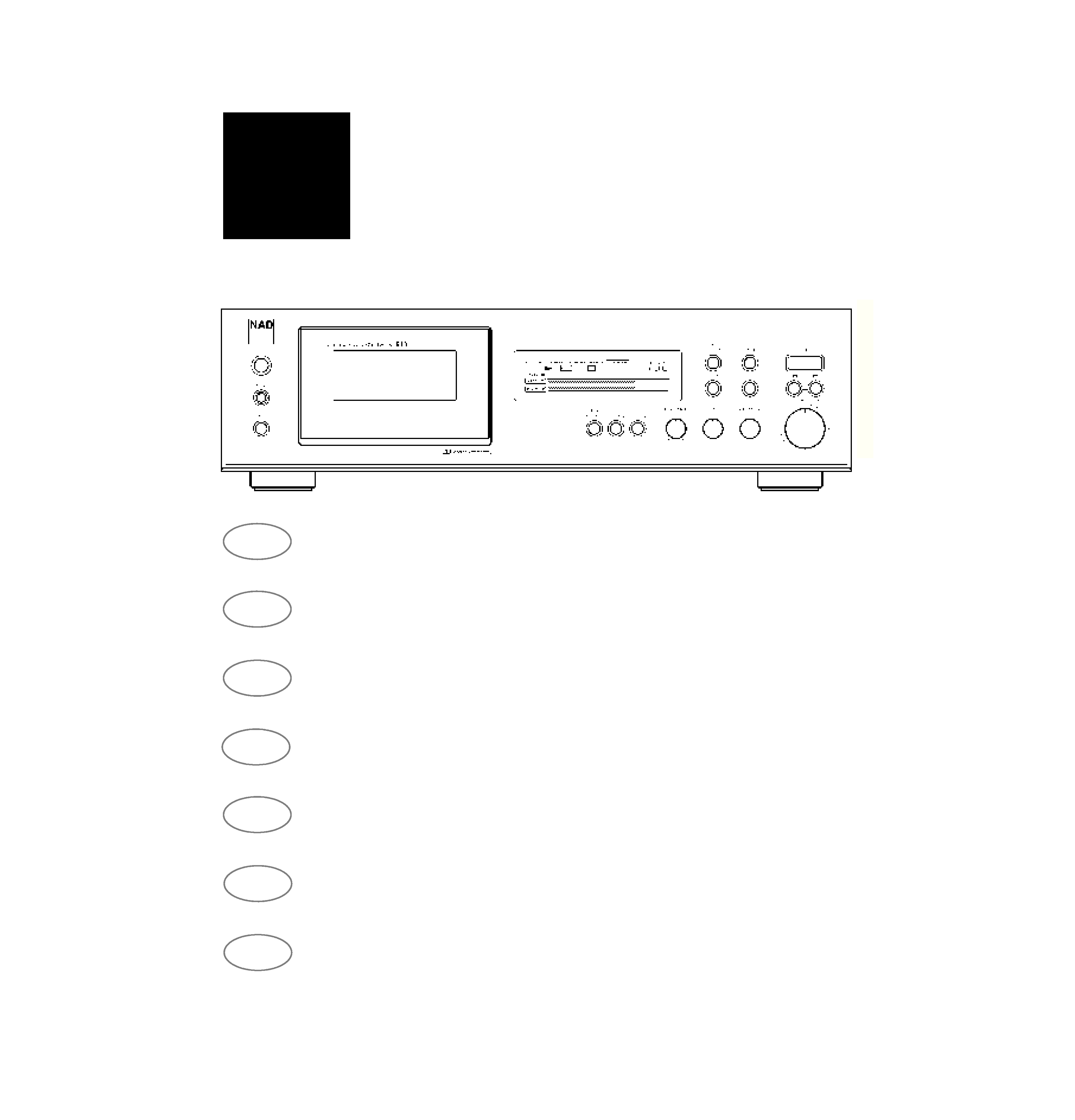 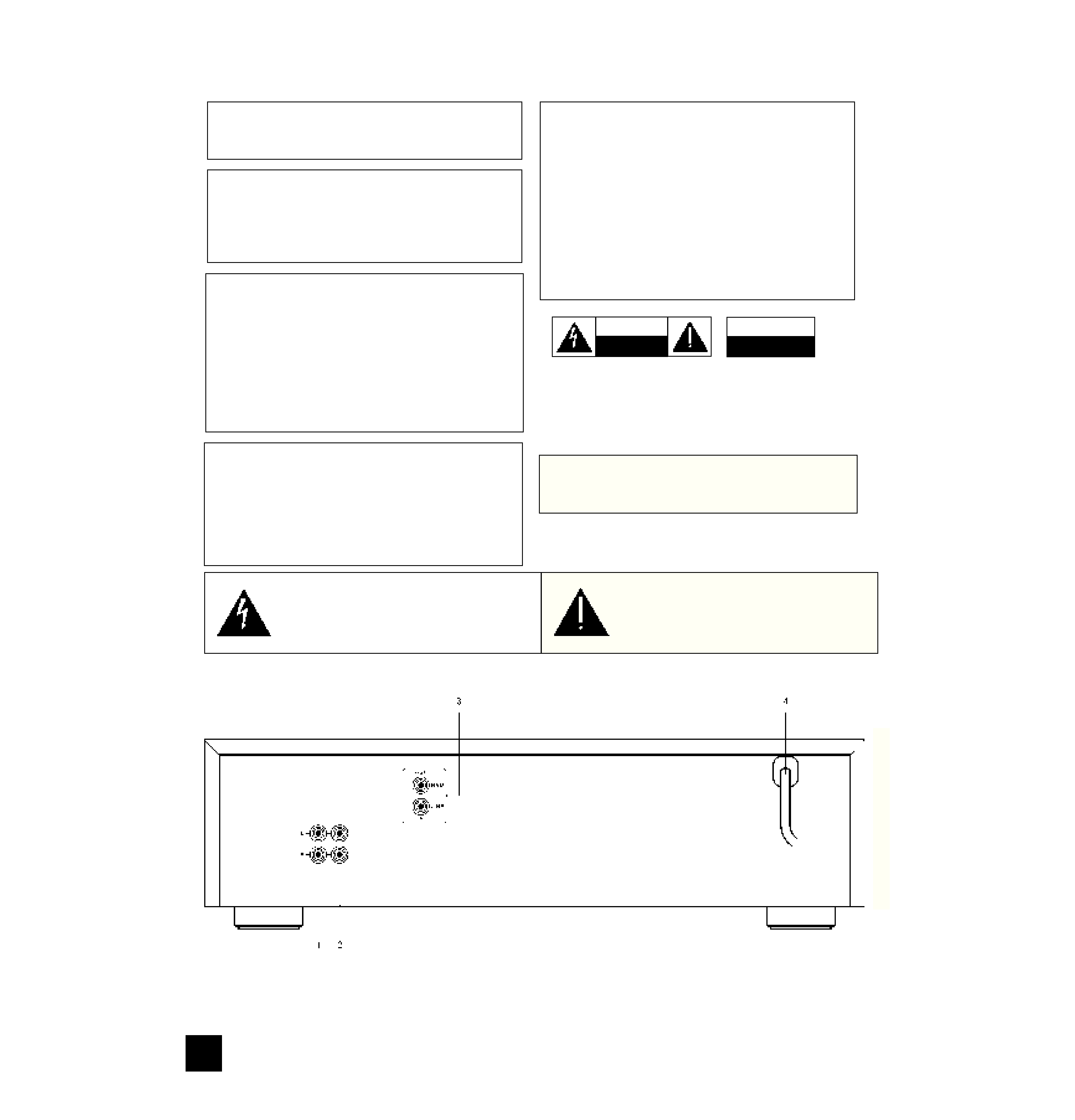 REAR PANEL CONNECTIONS
WARNING:TO PREVENT FIRE OR ELECTRIC
SHOCK, DO NOT EXPOSE THIS APPLIANCE
TO RAIN OR MOISTURE
CAUTION: TO PREVENT ELECTRIC SHOCK DO
NOT USE THIS POLARISED PLUG WITH AN
EXTENSION CORD RECEPTACLE OR OTHER
OUTLET UNLESS THE BLADES CAN BE FULLY
INSERTED TO PREVENT BLADE EXPOSURE.
ATTENTION: POUR PREVENIR LES CHOCS ELEC-
TRIQUES NE PAS UTILISER CETTE FICHE
POLARISEE AVEC UN PROLONGATEUR, UNE
PRISE DE COURANT OU UNE AUTRE SORTIE DE
COURANT, SAUF SI LES LAMES PEUVENT ETRE
INSEREES A FOND SANS EN LAISSER AUCUNE
PARTIE A DECOUVERT.
The lightning flash with arrowhead, within an equilateral tri-
angle is intended to alert the user of the presence of unin-
sulated "dangerous voltage" within the product's enclo-
sure; that may be of sufficient magnitude to constitute a
risk of electric shock to persons.
The exclamation point within an equilateral triangle is intend-
ed to alert the user of the presence of important operating
and maintenance (servicing) instructions in the literature
accompanying the appliance
Note to CATV system installer: This reminder is provided
to call the CATV installer's attention to Section 820-40 of
the NEC , which provides guidelines for proper grounding
and, in particular, specifies that the cable should be con-
nected to the grounding system of the building, as close to
the point of cable entry as practical.
NAD
2
CAUTION
RISK OF ELECTRIC
SHOCK DO NOT OPEN
ATTENTION:
RISQUE DE CHOC ELECTRIQUE
NE PAS OUVRIR
CAUTION: TO REDUCE THE RISK OF ELECTRIC
SHOCK, DO NOT REMOVE COVER (OR BACK).
NO USER SEVICEABLE PARTS INSIDE.
REFER SERVICING TO QUALIFIED
SERVICE PERSONNEL.
AFIN DEVITER UN CHOC
ELECTRIQUE, ET LES
CONSEQUENCES GRAVES
QUI POURRAIENT EN
RESULTER, TENTEZ PAS
D'OUVRIR L'APPAREIL ET
DE TOUCHER AUX
COMPOSANTS INTERNES
SANS LA PRESENCE D'UNE
SERVICE PERSONNEL.
THIS DIGITAL APPARATUS DOES NOT EXCEED THE CLASS B
LIMITS FOR RADIO NOISE EMISSIONS FROM DIGITAL
APPARATUS AS SET OUT IN THE RADIO INTERFERENCE
REGULATIONS OF THE CANADIAN DEPARTMENT OF
COMMUNICATIONS.
LE PRESENT APPAREIL NUMVERIQUE N'EMET PAS DE
BRUITS RADIOELECTRIQUES DEPASSANT LES LIMITES
APPLICABLES AUX APPAREILS NUMERIQUES DE LA CLASSE
B PRESCRITES DANS LE REGLEMENT SUR LE BROUILLAGE
RADIO ELECTRIQUE EDICTE PAR LE MINISTERE DES
COMMUNICATIONS DU CANADA.
©
1995.
NAD
ELECTRONICS
LTD.
613.
CAUTION : TO REDUCE THE RISK OF ELECTRIC SHOCK, DO
NOT REMOVE COVER (OR BACK). NO USER-SERVICEABLE
PARTS INSIDE, REFER SERVICING TO QUALIFIED SERVICE
PERSONNEL.
ATTENTION FOR EUROPEAN MODEL:
THIS APPARATUS COMPLIES WITH THE REQUIREMENTS OF
EC DIRECTIVE 87/308/EEC.
WARNING : BEFORE PLUGGING IN THE UNIT FOR THE FIRST
TIME, READ THE FOLLOWING SECTION CAREFULLY.
Some models are designed for use only with the power supply volt-
age of the region where they are sold.
European models:
AC 230V, 50Hz
U.S.A. anmd Canadian models:
AC 120V, 60Hz 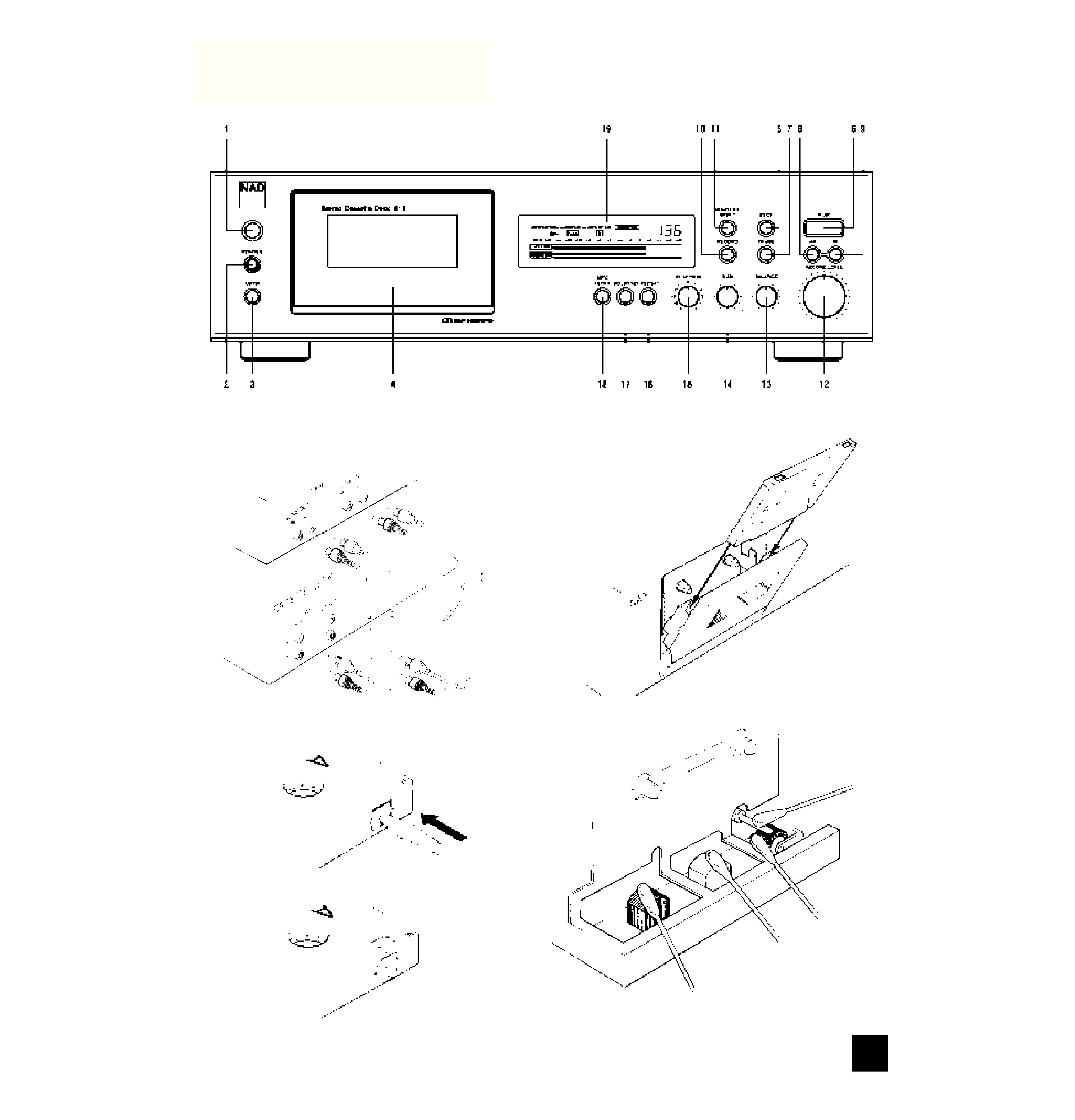 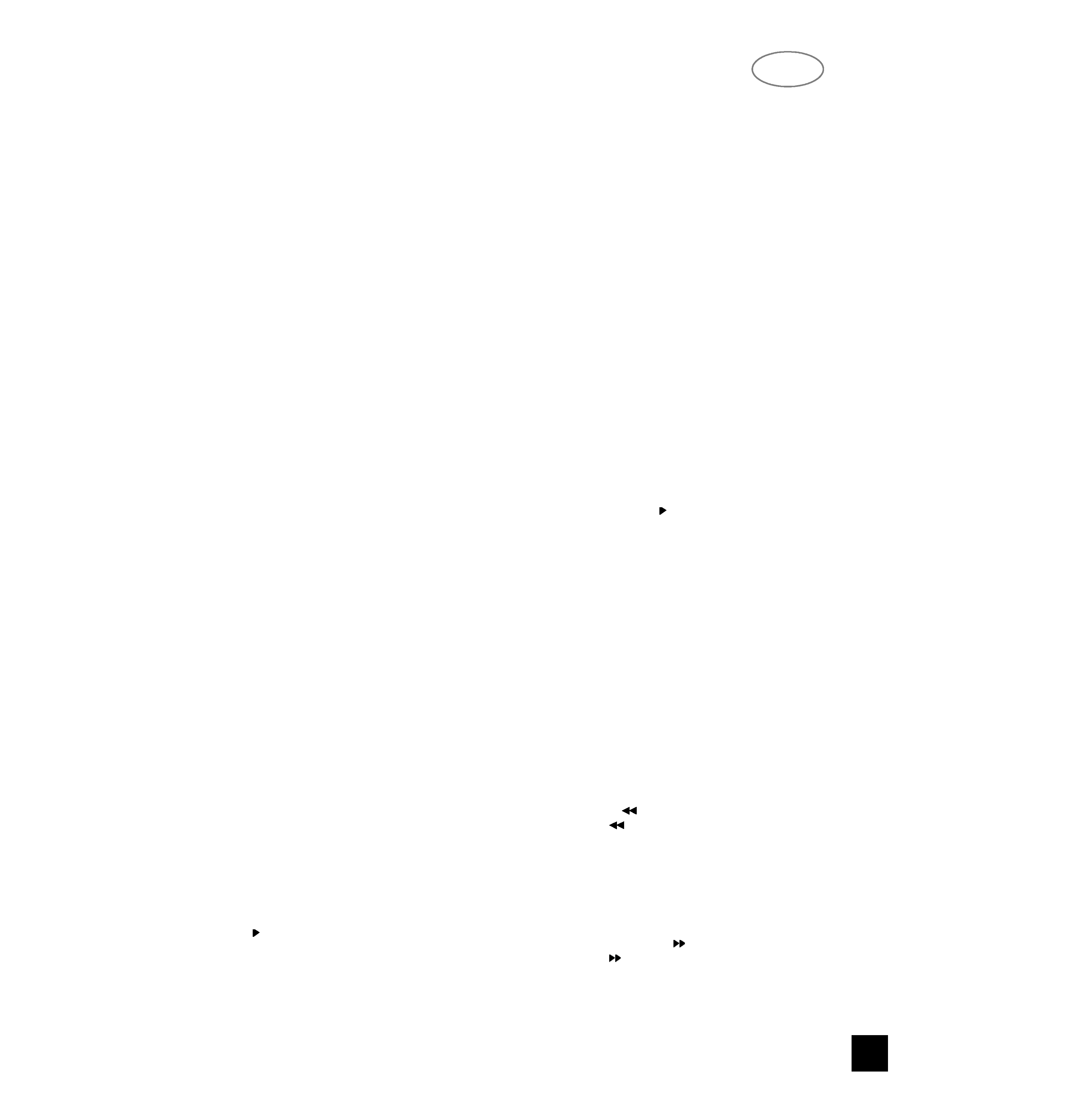 The "NAD Link OUT" connector allows remote con-
trol commands to be relayed from the 613 to other
products equipped with a NAD Link (or compatible)
input. For example, you can operate a CD player, a
tuner and this cassette deck from a single system
remote control. Connect a cable from the recorder's
NAD Link OUT socket to the NAD Link IN jack on
another product.
4. POWER.
Connect the AC mains cable to a convenient wall
socket or to an AC convenience outlet at the rear of
your amplifier or receiver.
FRONT PANEL CONTROLS
The numbers in the text refer to the controls in fig-
ure "FRONT PANEL CONTROLS".
1. POWER.
Press this button to switch on the power to the cas-
sette deck. The display will light up and the Pause
icon "ll" will flash for three seconds during which time
the deck will not respond to any commands. To turn
off the power, press again and release. Always press
STOP before switching off the deck.
2.PHONES.
Insert a stereo headphone with a 6.5 mm jack here.
When recording or playing back a tape the sound can
be monitored through the heaphones at a fixed level.
3. OPEN.
When this button is pressed, the door of the cas-
sette compartment swings open to allow a tape to be
inserted or to be removed. During play-back or
recording the door cannot be opened.
4. CASSETTE COMPARTMENT.
The cassette tape must be inserted into this com-
partment. Use the "OPEN" button to open the com-
partment. With a gentle push, until a click is heard,
the compartment can be closed.
5. STOP.
This button will stop all tape transport functions
such as play, record, fast forward and rewind. It will
also disengage the Record-pause and Play-pause
mode.
6. PLAY.
To play-back a tape use this button. The Play icon
will light up in the display.
·To load a cassette tape, remove it from its protec-
tive jewel case. Before inserting the cassette, ensure
the tape is straight and taut where it is exposed at the
thick edge of the cassette.
N.B. If necessary, insert a pencil into either hub
and manually wind the tape spool until any slack is
taken up.
· Switch on the unit by pressing the POWER (1)
switch. After use, the unit can be switched off by
pressing the button again.
· Press the OPEN (3) button to release the cas-
sette compartment door and insert the tape with the
thick edge -where the tape is exposed- downwards.
The cassette tape is held in a carrier within the door
assembly.
Refer to figure 2.
· Press the cassette compartment door shut until a
light "click" is heard. The tape is now in position.
· The tape can be removed by again using the
OPEN (3) button.
Please note the button doesn't work during tape
travel.
· Reset the tape counter (in the display) to "0000"
by pressing the RESET (11) button.
· Select the appropriate DOLBY NR (17) position
(Dolby NR Off, Dolby B NR or Dolby C NR) to suit the
particular tape you wish to play back. Refer to the
chapter "How to get the best performance from your
NAD 613 cassette deck" section "Dolby NR noise
reduction systems B & C" for more information.
· Press the PLAY (6) button to engage tape trans-
port. The play icon
in the display will light up to
indicate the play status.
· If the recording sounds dull, turn the PLAY TRIM
control (15) up (clock-wise) to restore accurate highs.
If the recording sounds edgy or sibilant, turn the Play-
Trim down to obtain smoother treble. Refer to chapter
"How to get the best performance from your NAD 613
cassette deck", section "The Play Trim control" for
further information.
· Press the STOP (5) button if you wish to end
play-back.
7. PAUSE.
If you wish to interrupt play-back or recording for a
moment, use this button. By pressing PLAY, you can
resume play-back or recording. In the display the icon
for Pause "l l" will light up to indicate the tape pause
status. Press Play again to resume playing back or
recording.
8. REWIND
.
With the
function you can rewind the tape from
right to left. Fast rewind is stopped automatically
once the beginning of a tape is reached or if
REPEAT Block had been engaged and the tape has
reached the beginning of the block (see also section
"REPEAT" (16) of this chapter). You can stop rewind
manually by using the STOP button.
9. FAST FORWARD
.
With the
function you can wind the tape forward
from left to right. Fast forward is stopped automatical-
ly once the end of a tape is reached. You can stop
fast forward manually by using the STOP button.
NAD
5
GB