Owner's Manual for NAD 522, downloadable as a PDF file. 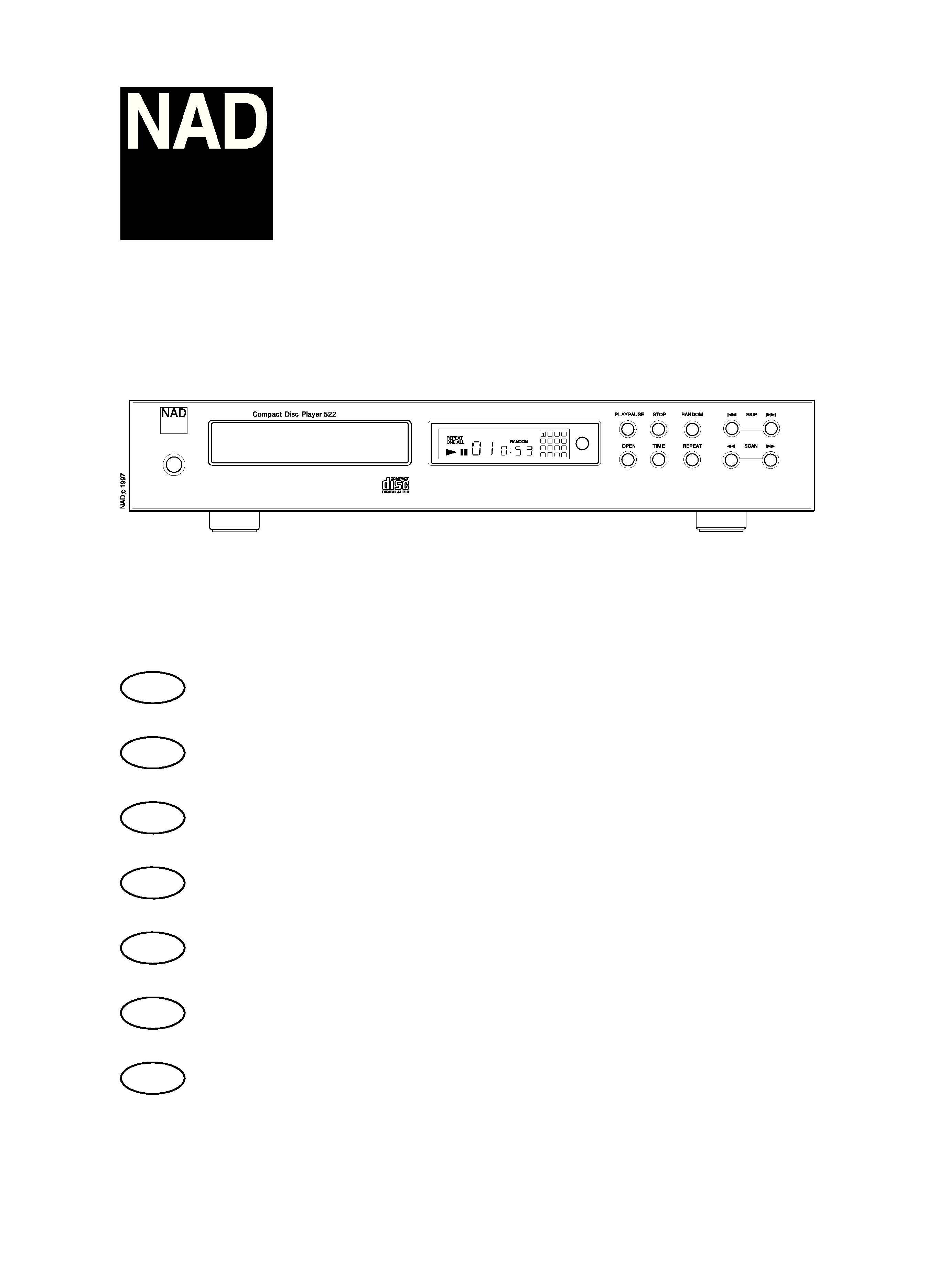 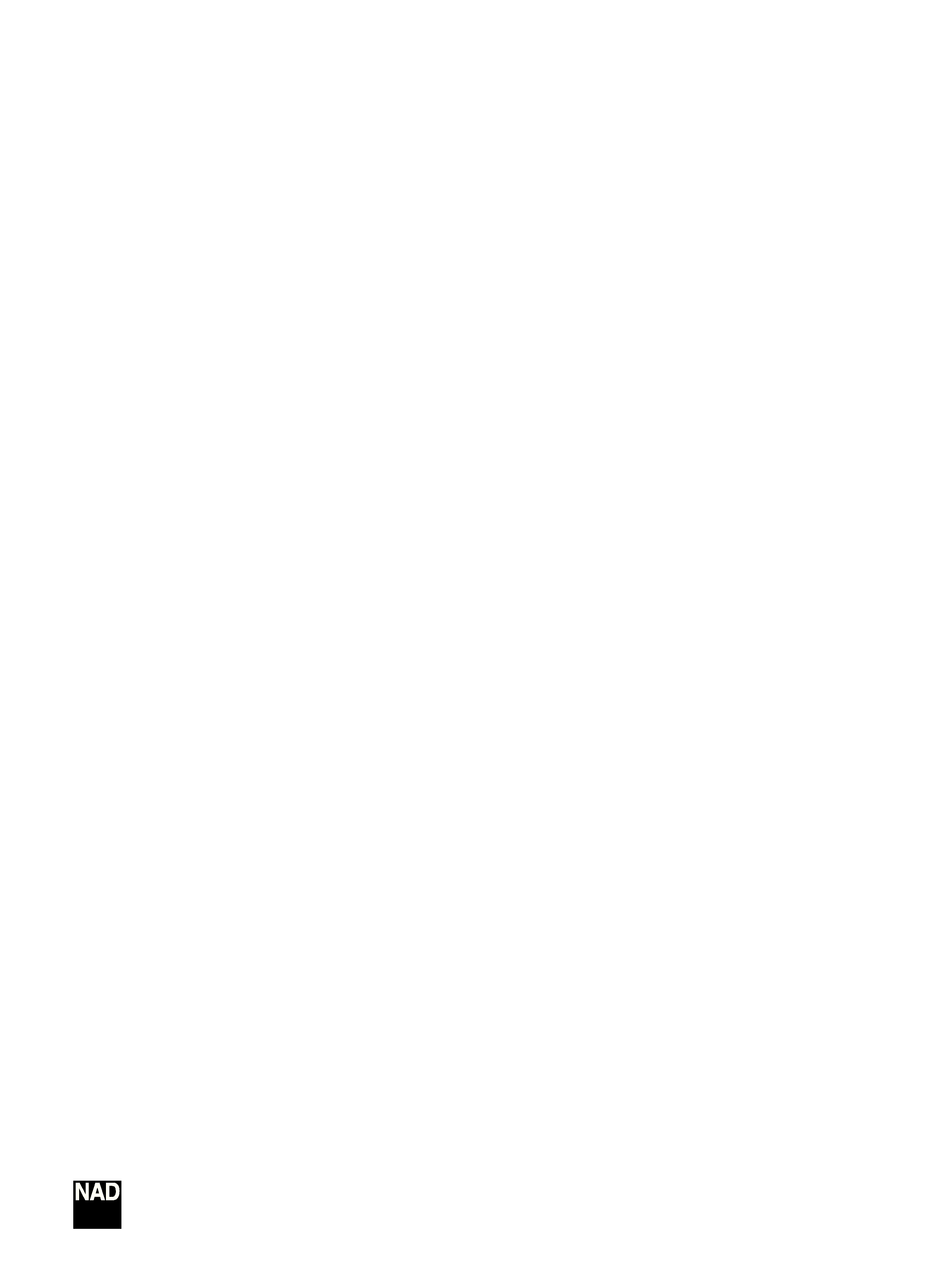 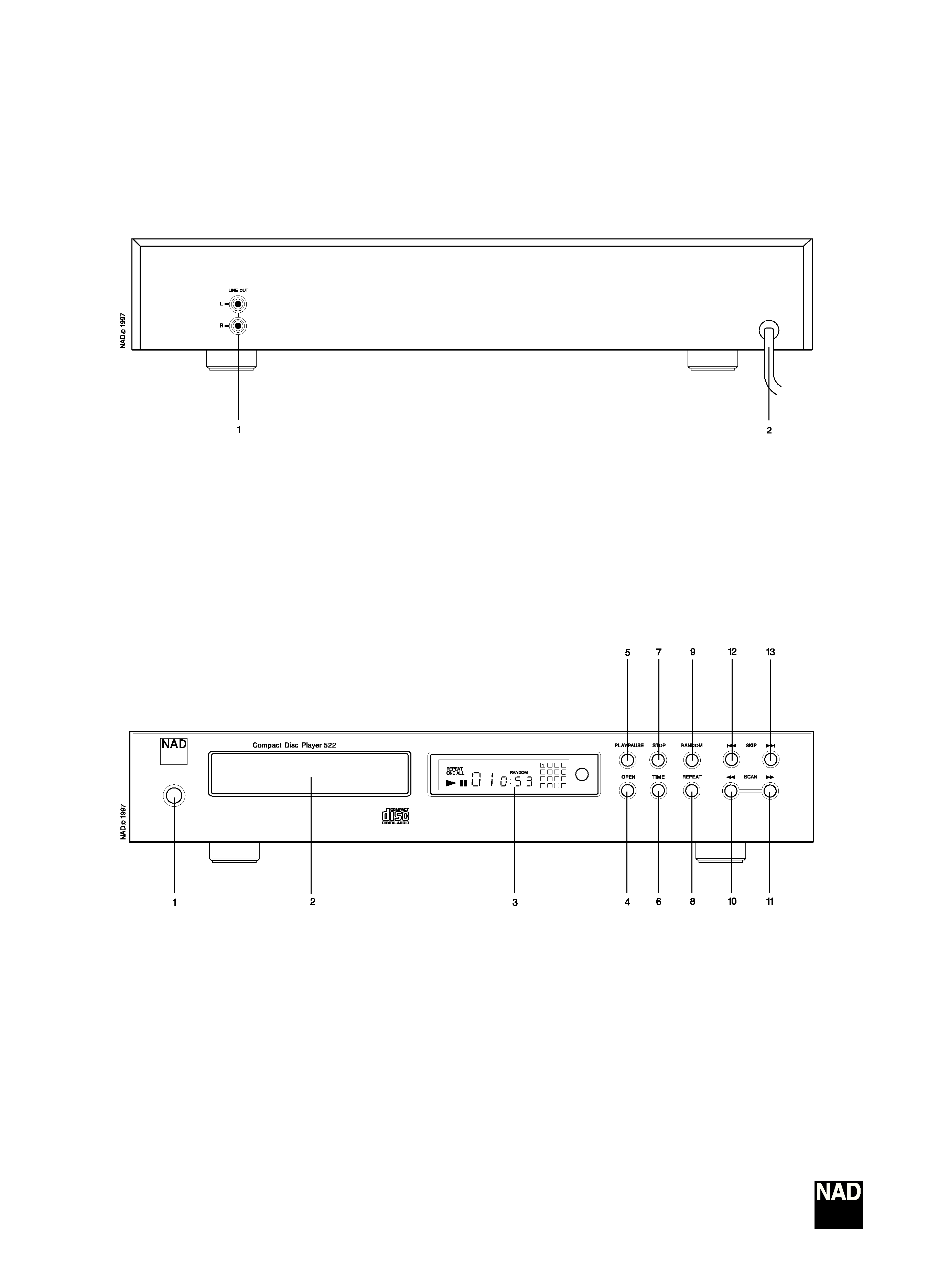 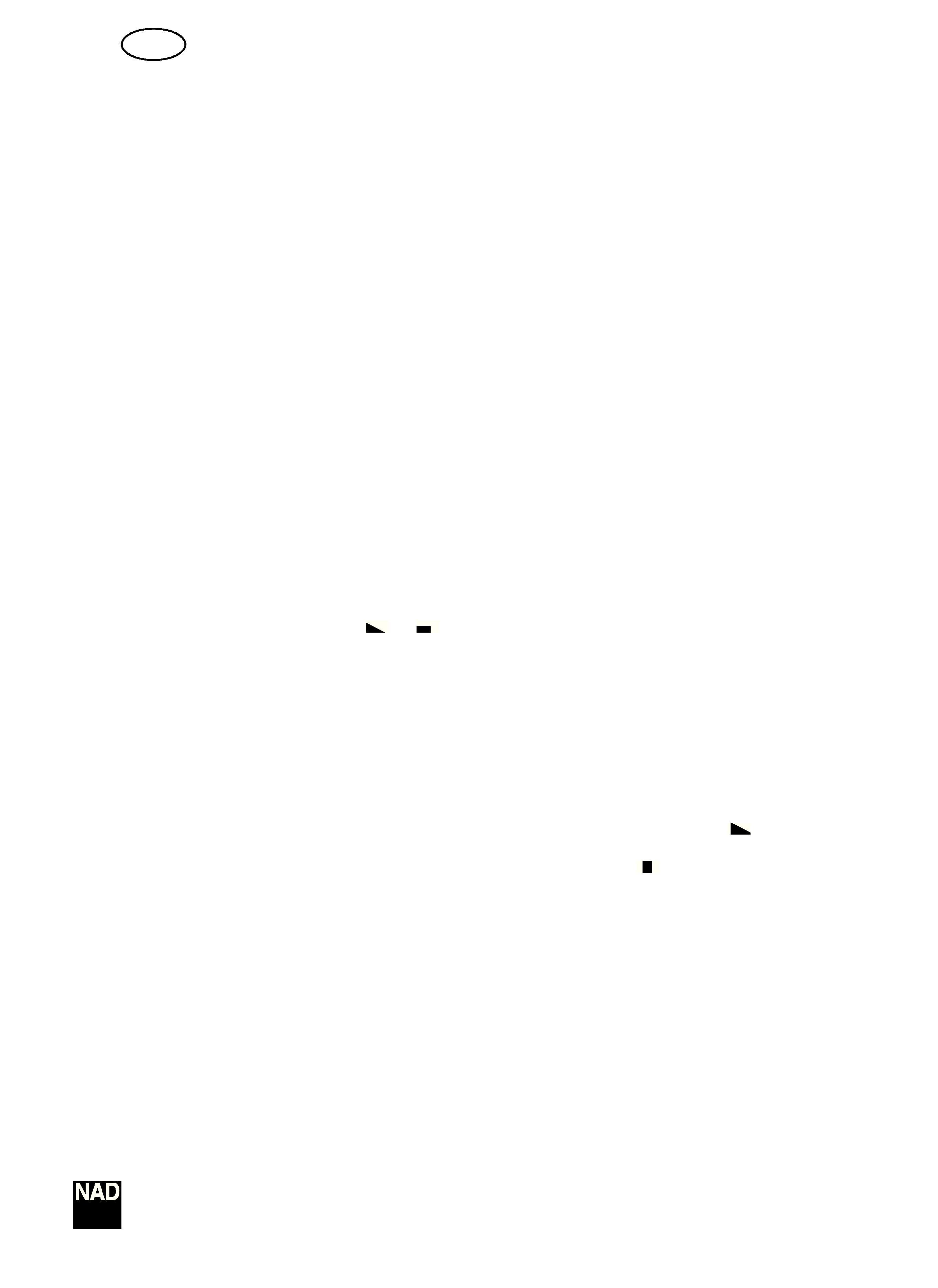 4
GB
A NOTE ON INSTALLATION
Install the Compact Disc player on a level, vibration-
free surface. (Severe vibration, or operation in a
tilted position, may cause the player to mis-track.)
The player may be stacked with other stereo
components, as long as there is adequate
ventilation around it.
If the player is placed in close proximity to a radio
tuner (AM or FM), a VCR, or a television set, the
operation of its digital circuits may produce static
that would interfere with reception of weak
broadcast signals. If this occurs, move the CD
player away from other devices or switch it off when
viewing or listening to broadcasts.
PLAYING COMPACT DISCS
A SIMPLE APPROACH
1. Connect a stereo cable from the L (left) and R
(right) Line Output jacks to the corresponding CD
inputs on your amplifier.
2. Plug in the AC power cord.
3. Press the green POWER button to turn on the
player.
4. Press OPEN to open the disc drawer.
5. Place a CD, label side up, in the tray's circular
recess. Be certain that the disc is centered within
the recess.
6. Press
PLAY/PAUSE.
The
drawer
closes
automatically, and the disc begins to play.
7. At any time you may press SKIP
or
to
select different tracks on the disc.
8. Press PLAY/PAUSE if you want to stop play
temporarily while keeping the pickup at its
current position on the disc. Press PLAY/PAUSE
again when you want to resume playback. Press
STOP if you want to end play and re-set the
pickup to the beginning of the disc.
REAR PANEL CONNECTIONS (fig.1)
1. LINE OUTPUT.
Connect a cable from these jacks to your amplifier.
Plug one end of a stereo audio cable into the L
(upper) and R (lower) output jacks. Connect the
other end of the cable to your stereo amplifier's CD
input, or to any other `line-level' input jacks (such as
the AUXiliary inputs). Do NOT connect this cable to
the amplifier's PHONO input jacks.
2. AC LINE CORD.
Connect this power cord to an AC mains wall outlet
or to an AC convenience outlet at the rear of your
amplifier.
FRONT PANEL CONTROLS (fig.2)
1. POWER ON/OFF.
Press this green button to switch on the power to
the disc player. Press again and release to switch
the power off.
2. DISC DRAWER.
To play a disc, press the OPEN button to open the
disc drawer. Place the CD within the large circular
recess in the drawer, with its transparent playing
surface facing down. The label must face UP.
CD-3 discs (3-inch CD `singles') can be played
without the aid of an adapter. Place the disc in the
drawer, centered in the smaller circular recess, with
its label facing UP.
NOTE:
This
player
was
not
designed
to
accommodate a `damping disc' placed on a CD,
nor two CDs stacked together. It plays audio CDs,
but not discs identified as CD-V, DVD, CD-I, CD-
ROM, or PHOTO CD.
3. DISPLAY.
The display provides information about playback
status and about the laser pickup's location on the
disc. The displayed track/time information is
obtained by reading inaudible `sub-codes' in the
disc.
Track number Each disc is segmented into
numbered tracks when the recording is made;
typically each numbered track will correspond to a
different song, symphonic movement, etc. These
track numbers are identified on the CD package
and are encoded in the disc by its manufacturer.
In some CDs, at the manufacturer's option, tracks
may be sub-divided into sections identified by Index
numbers. This player does not display Index
numbers.
Time Normally this display shows the time elapsed
since the beginning of the current track. Using the
TIME button you can switch the display to show the
playing time remaining to the end of the disc.
When you load a different disc and use the OPEN
button to close the disc drawer, the display shows
the number of tracks and the total playing time of all
the tracks on the disc.
Status A right-pointing arrowhead
, located
near the left edge of the time display, glows during
PLAY. Two vertical bars
indicate that the player
is in PAUSE. In STOP mode the display reverts to
showing the number of tracks and total playing time
of the disc.
`no disc' glows in the display when no disc is
present or when you load a disc that cannot be
read (because it is dirty or is upside-down).
REPEAT ONE glows in the upper-left corner during
repeat-play of a single track. REPEAT ALL glows
during repeat-play of the entire program or disc.
REMAIN glows in the top centre area of the display
if you have pressed the TIME button to show the
remaining time in the track, disc.
Remote receiver. An infrared sensor, located the
right-hand portion of the display window, receives
commands from the remote control. There must be
a clear line-of-sight path from the remote control to
NAD 522 COMPACT DISC PLAYER 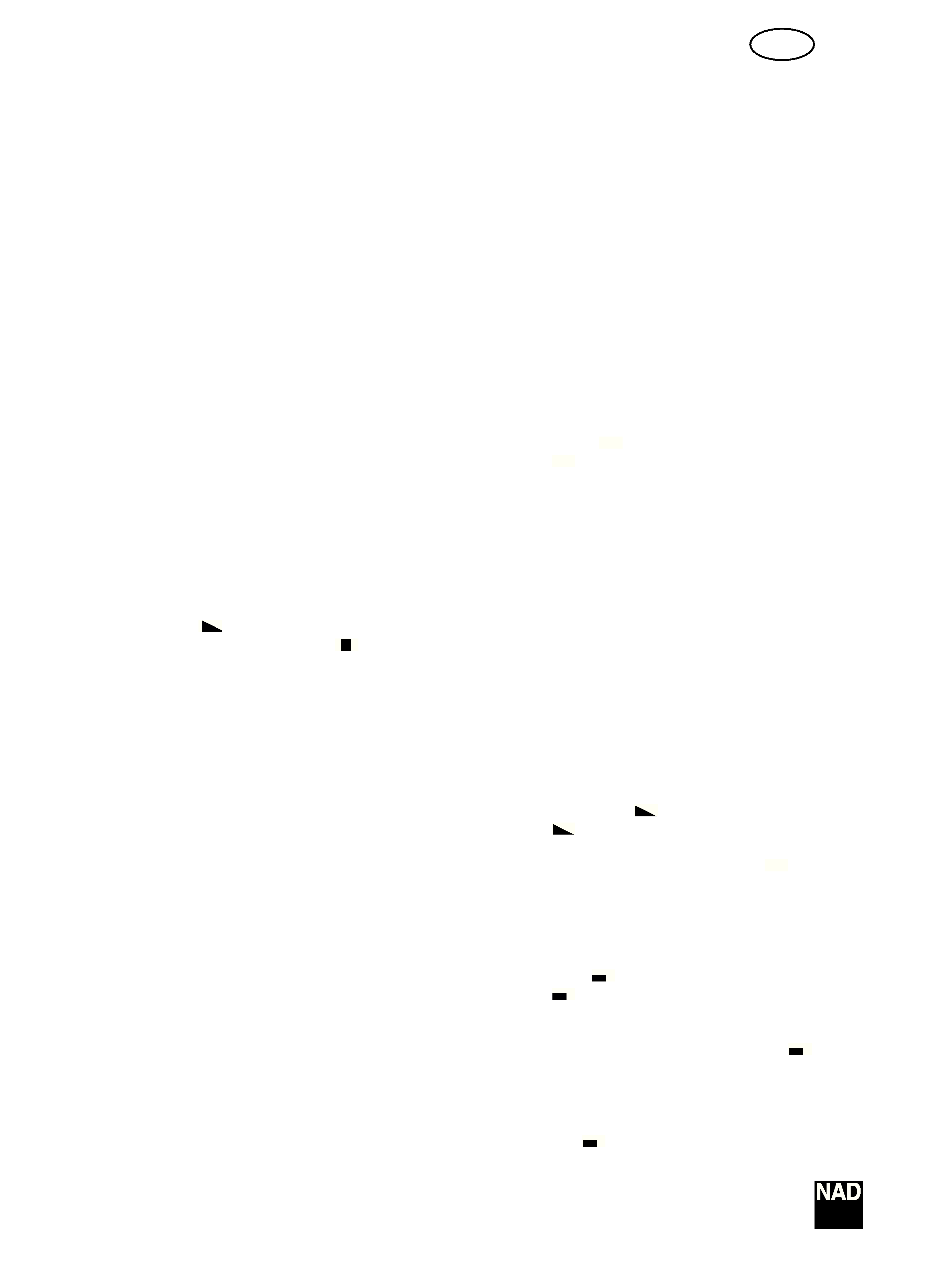 5
GB
this window; if that path is obstructed, the remote
control may not work.
4. OPEN.
Press this button to open the disc drawer, and
press it again to close the drawer. If this button is
pressed while a disc is being played, the playback
will stop, the pickup will re-set to the beginning of
the disc, and the drawer will open.
When the disc drawer is open, the drawer-closing
mechanism can also be activated by pressing PLAY
or by gently pushing the drawer inward.
CAUTION: The disc drawer is opened and closed
by an internal motor. Do not close the drawer by
hand with the power off.
When the drawer closes, the player scans the disc's
`table of contents' and displays the number of
tracks and total playing time on the disc. If you
press PLAY to close the drawer this display is
skipped, and play commences immediately at
Track 1.
5. PLAY/PAUSE.
This dual-function button alternates between
starting and stopping playback. Press to start play
or to resume play after Pause. During play, press
this button to stop playback temporarily, keeping
the laser at its current position on the disc.
The PLAY mode is identified by a right-pointing
arrowhead
in the display. In the PAUSE mode
is identified by two vertical bars
.
To resume playback at the exact point where it
stopped, press PLAY/PAUSE again. If you don't
want to resume play at the same point, you may
use the SKIP and SCAN controls to cue the pickup
to a different starting point before pressing PLAY
again.
6. TIME.
The TIME button has two modes, as follows:
TIME: the elapsed time since the beginning of the
current track, in minutes and seconds. (This is the
`default' setting, selected automatically when the
player is turned on.)
REMAIN (track number blank): the total playing time
that remains until the end of the disc and the total
number of remaining tracks (including the current
track). During program play the remaining time in
the program is shown.
7. STOP.
This button stops play, cancels any repeat-play
cycle, and re-sets the pickup to the beginning of
the disc. The display reverts to showing the number
of tracks and total playing time on the disc.
8. REPEAT.
This button engages an endless-repeat cycle.
Press the Repeat button once to select the
REPEAT ONE mode, in which only the current track
is repeated over and over again. Pressing the
Repeat button once again selects the REPEAT ALL
mode, in which the entire disc is played from
beginning to end, over and over again. Press the
Repeat button a third time to cancel the repeat
cycle and return to normal operation.
9. RANDOM.
Pressing RANDOM will play all the tracks on the CD
in a random order. Press RANDOM either from the
Stop or the Play mode and the 522 will play the
tracks on the CD in random order until all the tracks
have been played.
Press RANDOM button again to cancel Random
play and return the 522 to the normal Play mode.
When the 522 is in Random mode `RANDOM' will
be shown in the Display Panel.
10. SCAN BACK
The SCAN
button causes the optical pickup to
scan backward through the recording at high
speed. This button works only while the player is in
PLAY or PAUSE. After a STOP command, or after
loading a new disc, you must press PLAY before
the scan circuit will work.
If the scan is initiated while the player is in PAUSE
the scan is silent, approximately 15-20 times faster
than playing speed. If the scan is initiated during
PLAY it is much slower (approximately three times
playing speed), and the music will be heard in
fragmentary form at reduced volume as the player
scans through it. Use this `audible scan' to cue the
player precisely to the spot where you want to
resume play.
If you scan back to the beginning of the disc while
playing Track 1, the player automatically reverts to
normal playback.
11. SCAN FORWARD
The SCAN
button causes the optical pickup to
scan rapidly forward through the music. The
behavior of this function is similar to SCAN
.
If you scan forward to the end of the disc while
playing the final track, the scan will stop and the
Time display will show the table of contents. (There
is no `wrap-around' mode.)
12. SKIP BACK
The SKIP
button causes the laser to jump
backward to the beginning of each numbered track
on the disc. The first press skips back to the
beginning of the current track. Press SKIP
twice to skip back to the previous track.
Continuous pressure will cause the player to skip
tracks repeatedly, concluding at the beginning of
the disc (Track 1).
Pressing SKIP
once during play causes the
pickup to jump back to the beginning of the current

This manual has 11 pages, file size: 2.8 MB. It's available in languages: English.